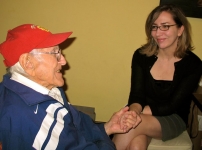 I feel him now among us, young again, his strong legs reaching and pushing, his great lungs drawing in the sweet air, his grand, bounding heart beating, beating, beating. Listen. You can hear his laughter.

Eulogy for Louis Zamperini written by Laura Hillenbrand, the author of Unbroken: A World War II Story of Survival, Resilience, and Redemption.” Hillenbrand became close friends with the World War II hero during the seven years it took to research the write the book. Confined to her Bethesda home due to chronic fatigue syndrome, Hillenbrand’s primary contact with Zamperini for years was by telephone, with some of their conversations lasting three hours or more as she painstakingly researched the book. When they finally met in person, Zamperini presented her with his Purple Heart medal. Even after the book was published, the two shared almost daily telephone calls.

Angelina Jolie, director of the film based on the book, delivered the remarks on Hillenbrand’s behalf July 13 at Zamperini’s memorial service at Hollywood Presbyterian Church, where he had been a member and taught Sunday school for many years.

At Zamperini’s celebration of life in Torrance on Thursday, friend Debbie Hays of the Torrance Historical Society read Hillenbrand’s eulogy.

Louie and I began and ended in laughter.

I went to him drawn by the almost unimaginably dramatic and often harrowing events of his life. But when he spoke, something surprised and captivated me even more than his history. As he told of a war ordeal of profound suffering, in his voice there was no mournfulness, no self-pity, no bitterness, no anger. Instead, he was cheerful, buoyant, sparklingly witty. “I’ll be an easier subject than Seabiscuit,” he said, “because I can talk.”

If anything defined Louie, it was that. What made his life transcendent, what made it resonate in millions of hearts, was not the hardship he encountered, but the way in which he greeted it, how he turned it to joy, and what that told the rest of us about the potential that sleeps within ourselves.

For all its grueling trials, his life was not a sad story because he wouldn’t allow it to be. It was a triumph — of persistence, of optimism, of love. Louie summoned strength amid suffering, joy amid sorrow, forgiveness amid cruelty, and hope that knew no master. To him, his odyssey was a gift. His laughter was irrepressible because he looked about him and saw only blessings. The most beautiful thing about this wondrous man was that he wished for all of us to see in our own lives what he saw in his. His story was his gift to us.

He scattered every talk we had with laughter. From our first hello to his last, singsong, “I love you! I love you!” every word he shared with me was infused in joy. In my hard hours, he was my steadying hand. In my happy hours, he was my gentle reminder to be alive to my blessings, to be grateful for them, to share them as he did his. Because I knew him, I see my world, my struggles, my bliss, my dreams, differently, and my life is richer, deeper, sweeter.