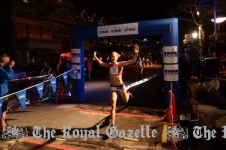 On Friday evening Heather Kampf repeated as winner of the KPMG Invitational Bermuda Women’s Elite Mile as Sarah Brown finished runner-up yet again in a thrilling finish that saw the two Americans separated by just two seconds in times that were faster than last year.

Kampf broke the tape in 4 minutes, 44.89 seconds, five seconds faster than her 2013 winning time of 4:49 while Brown was just a few strides behind in second place as she shaved four seconds off her time year, clocking 4:46.16. Newcomer Lauren Hagans made it three Americans on the podium, finishing in third in 4:53.14.

Just five runners competed in the race, with Bermuda’s only competitor, Tamika Williams finishing fourth in 5:10.34, a disappointing time for her as she was looking to shave seven seconds off last year’s finish and run a sub-5 minute Mile.

The crowd cheered loudly for Williams as she came towards the finish line, unable to keep up with the faster, younger Americans. Lillian Mariita, of Kenya, whose times suggests she is more of a distance runner, completed the finishers in 5:24.38. All five runners will be back in action this morning in the 10K race. Kampf is starting to make a habit of celebrating her birthday in a special way in Bermuda as last year she won on her 26th. Today she turns 27.