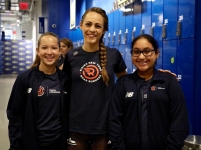 NEW YORK – New York Road Runners (NYRR) has announced that three-time Olympian and Team New Balance athlete Jenny Simpson has partnered with the world’s premier running organization and will serve as Ambassador & Special Advisor to its new youth fitness program, Rising New York Road Runners. In her new role, Simpson will act as a mentor to program participants, a guide and resource to coaches across the country, and an advocate for the critical role running, fitness, and physical education plays in the lives of youth.

Fresh off her silver medal 1500 meter performance at the IAAF World Championships in London, and her return to the New Balance 5th Avenue Mile on Sunday, where she is now a record six-time race champion, Simpson, 31, has joined a group of Rising New York Road Runners from the Bronx to showcase the program’s new curriculum. The program, which is backed by the latest in physical education research, is designed to build running skills in ways that work for kids of all ages and abilities, gradually introducing new skills as students grow and instills kids with the confidence and ability to stay healthy and active for life.

“This is personal for me. I discovered running through an elementary school program and experienced the positive benefits that fitness programs like Rising New York Road Runners can have on creating a lasting relationship with running on young people,” said Simpson. “I’m at a point in my career where I want to make an impact beyond my performance on the track. Partnering with NYRR and serving as Ambassador and Special Advisor to Rising New York Road Runners is a wonderful opportunity to connect with the next generation about living a healthy and active life while supporting the coaches who are so critical to the program’s success. I’m excited to become a part of the New York Road Runners team.”

In addition to her role as Ambassador & Special Advisor to Rising New York Road Runners, Simpson’s partnership with NYRR will grow through involvement across the vast array of NYRR initiatives. From running events including the TCS New York City Marathon and runner initiatives such as group training and virtual running, to programming and marketing initiatives, Simpson will provide an elite athlete’s perspective to NYRR’s efforts to help and inspire people through running.

“We are delighted to welcome Jenny to the New York Road Runners family and look forward to her impact and leadership as our new Ambassador and Special Advisor to Rising New York Road Runners,” said Rachel Pratt, senior vice president of youth and community services of NYRR. “Her journey from a school-based running program to Olympic medalist is inspiring and embodies the spirit of Rising New York Road Runners.  Together with our coaches across the country, we will work hard to grow the next generation into strong and confident athletes, students and individuals.”

With a focus on fostering fundamental movement and sport skills, Rising New York Road Runners aims to teach assurance and competence in young athletes. The program introduces age appropriate concepts as participants develop and grow to build their physical literacy, similar to the ways in which other subjects like math and science are taught in schools. Based on evidence discovered during NYRR’s pilot program, which was conducted in conjunction with Tufts University’s Friedman School of Nutrition Science and Policy, the new approach will build self-assurance, reduce the risk of injury, and inspire lasting healthy attitudes toward activity, in a fun environment conducive to learning.

Rising New York Road Runners is an evolution of NYRR’s previous offerings, and continues to provide free programming to schools, after-school programs, and community centers nationwide. NYRR annually serves 267,000 youth nationally, including 134,000 from New York City’s five boroughs participated in free NYRR youth fitness programs. With the introduction of Rising New York Road Runners, which launched nationwide with the start of the 2017-18 school year, NYRR hopes to better aid the communities we currently serve, expand our offerings to schools and community centers new to our programs, and continue to grow the number of participants.

For more information, go to: rising.nyrr.org