Jenny Simpson and coach hope for London medal after trials 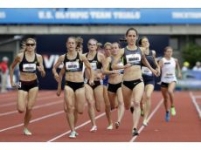 By David Ramsey, The Gazette

Juli Benson has spent dozens of hours working with Jenny Simpson. She’s not spent a single hour worrying about Simpson.

It’s easy to be confident about Simpson’s future. She competes Sunday in the 1,500 finals at the Olympic trials in Eugene, Ore. Simpson, a Monument resident, and Benson, Air Force Academy’s cross country coach and assistant track coach, are laboring together on a quest for an Olympic medal in the 1,500. Simpson hopes to continue this quest Sunday with a top-three finish at the trials.