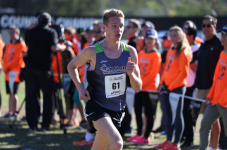 After allowing Philip Rocha of Arcadia (California) High School to lead for the first 400 meters, Hunter shot to the front of the pack and opened a lead that grew the rest of the way to the finish line. Hunter improved on his fourth-place finish last year at Foot Locker to claim his first national cross-country title in 14 minutes, 55.7 seconds. Rocha was second in 15:07.9, with Carmel (Indiana) High School’s Ben Veatch close behind at 15:09.6.

“That was the plan,” said Marc Hunter, Hunter’s father, of his son’s early break. “Drew’s strength is his strength. We knew if he went with a hard pace from the get go, it would be an easier win versus a kicker’s race. We thought he could win a kicker’s race, too, but we didn’t want to leave it to chance.”