How running has changed since the 4-minute Mile 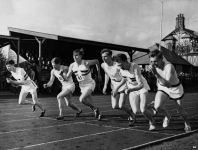 As we approach the 60th anniversary of the 4-minute Mile, historian Mary Beard reflects on what has changed in the sport of running.

In a few days' time it will be the 60th anniversary of the first 4-minute Mile. On May 6, 1954, at Iffley Road sports ground in Oxford, Roger Bannister, supported by his friends Chris Brasher and Chris Chataway, ran a Mile race in 3 minutes 59.4 seconds. If we leave aside the story of James Parrott, who is supposed to have raced a Mile around the streets of Shoreditch in three minutes something on May 9, 1770, this was the first time a human being had cracked the 4-minute Mile barrier. Certainly, the first time it was fully ratified by an array of official stopwatches.

When I was a child in the late 1950s, my parents taught me about Bannister's Mile just as they taught me about the first climbing of Mount Everest. These were meant, I suppose, to be patriotic lessons in the physical prowess of Britain and the Commonwealth. I can still vividly conjure up in my mind the famous image of Bannister breaking through the finishing tape in triumph (though frankly I now think that he looks more in agony than in triumph).

Continue reading with audio at: www.bbc.com