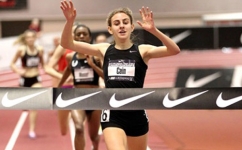 Against a field of pros at the USA Indoor Championships in Albuquerque on Sunday, 16-year-old Mary Cain elected to “keep it slow and kick it out” in the women’s Mile. Cain, whose national high school record for the distance is 4:28.25, took the field through the first half Mile in 2:56 and then covered the final 400 meters in 58.6 to win in 5:05.68. Yes, that’s right, a much slower time than the high school races she ran in 2012. But her goal had been to “have control of the race,” and she surely had that, every step of the way. It was an example of tactical mastery.

Cain had signed up for the 800 and the Mile at the meet; doing both would have meant running an 800 on Sunday after 15 minutes after the Mile had ended... But he soon changed his mind; the next day the paper quoted him saying Cain would do the Mile because “she needs to learn how to run in packs when the pace is slow." Well, she certainly learned that in her 5:05.68 win. “After this there are few meets that I could get her into that would be like that," observed Salazar. Salazar, as an NBC Sports commentator pointed out, sees Cain as a “ten-year project.”

On the men's side, Will Leer emerged as a double champion. In a 3000 meter race on Saturday at altitude, with just four entrants, he was unchallenged, winning by almost nine seconds in 8:07.84. In Sunday’s Mile, Leer hung back in the pack early and worked his way up. He passed four runners on the final lap to win in 3:58.79 (the fastest indoor Mile at altitude), with Craig Miller next in 3:58.90.