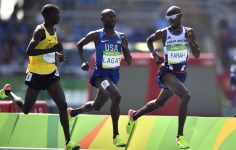 Bernard Lagat, 41, ran the first round of the men’s 5,000 meters on Wednesday morning. With his fifth-place finish in his heat in 13:26.02, he qualified for the final on Saturday night. (The top five finishers in each of two heats, plus the next five fastest times, advanced to the final.)

After the race, he spoke to reporters for a few minutes. In that time Lagat, the oldest runner on the U.S. Olympic team, had plenty to say. Below are the highlights:

Lagat won a medal 16 years ago at the Olympics in Sydney. How strange is it to still be running at the Games?

“It is crazy,” Lagat said. “But you know what? It is hard work, too. You believe every single day. When I was running in 2008 in Beijing [to think] that you’ll ever come back and run in 2012 and 2016, I would have said no. The last Olympics in 2012, I went for my last opening ceremony and my last closing ceremony. I was in London full swing. That was my last. So this is something I’m enjoying doing right now.”