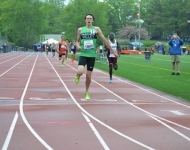 WHITE PLAINS, N.Y. — When Ben Malone steps to the line in the Lou Lanzalotto Bergen Meet of Champions 800 on May 28, it will be the last individual race he runs in New Jersey in his high school career.

The Pascack Valley star, who set the Bergen County mile record two weeks ago when he finished second at the Penn Relays in 4:05.59, made that a certainty when he accepted an invitation to run in the adidas Dream Mile at Icahn Stadium at Randall's Island on May 25, the same time as the second day of the state sectionals.

"I wish I could do both," said Malone, who will meet 10 of the best high school milers in the country as part of the Diamond League international meet held May 25. Malone placed a distant 11th in last year's race, which was run after the state Meet of Champions, setting a then-Bergen County record of 4:07.02. The race was won by Bernie Montoya of Arizona in 4:01.32. Montoya will defend his Dream Mile title.