Gary Martin has Olympic dreams after running a sub-4 Mile 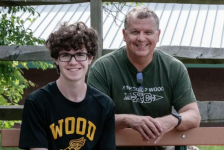 By Matt Breen, The Philadelphia Inquirer

Gary Martin started to dream last year about running one day in the Olympics but hesitated to share his aspirations, knowing how overly ambitious it might sound since the path he took to becoming an elite high school runner was so unlikely.

He planned to play soccer at Archbishop Wood, then switched to baseball before finishing his freshman year on the track team. Everything — the state records, the national titles, and Saturday’s sub-4 minute Mile — started almost by accident.

And the Olympics? Maybe that was a bit much.

Martin is still three weeks from graduating high school and the Olympics are years away, but races like Saturday make lofty goals feel tangible.

He won the Mile at the Philadelphia Catholic League Championships in 3 minutes, 57.98 seconds, the 6th fastest time ever by a U.S. high school runner (#5 individual) and the fastest Mile ever in a race exclusively made up of high schoolers.

Martin finished the race at Cardinal O’Hara 20 seconds ahead of second place, becoming the first Pennsylvania high schooler to run a sub-4 minute Mile despite not having a competitor to push him.

Martin came close twice in the last four weeks to breaking the sub-4 minute barrier, a magical number in track circles. And now he’s the 14th U.S. high schooler to ever do it.

“It’s been a crazy path, and I never expected to be here,” Martin said. “It’s not like I went into high school thinking I would break 4 minutes in the Mile. I didn’t even go into high school thinking I was going to run track. It’s been a quick journey, but a crazy journey. What has me excited is that it feels like I’ve just begun. I’m just at the beginning of my track career and I feel like I have a lot more left to accomplish and I’m only getting started.”

Archbishop Wood, like most Archdiocesan schools, does not have an on-campus track, so the team practices in the parking lot or tries to find when tracks at nearby public schools are open. Martin does not have a private coach, instead leaning on Wood’s Paul Streleckis and his assistants. The formula has worked as Martin will take his Olympic dreams in the fall to the University of Virginia.

Streleckis gave his runners an offseason training packet after Martin’s freshman year but Martin ignored it. He joined the cross country team the following fall and was leading the state championship after the first mile before finishing in 50th place. Streleckis told him that the difference between first and 50th was that packet he ignored. From then on, Martin devoted himself to track.