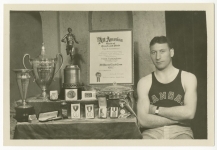 “It hurt like thunder to walk, but it didn't hurt at all when I ran. So for five or six years, about all I did was run.”

It was another bitterly cold morning in Everetts, Kansas, a rural farming town like so many hundreds of communities throughout the American Midwest as the world was waging the Great War, World War I.

The residents in those small towns were not strangers to hard—often back-breaking—work, and from early childhood, they learned to value, even to love, hard work. Chores were doled out nearly as soon as a child could walk.

Such was the life of the Cunninghams: father Clint was a water-well driller who moved his family around a lot in a struggle to keep them fed.

On August 4, 1909, while living in Atlanta, Kansas, Clint’s wife bore him a son, whom they named Glenn. By the time he was six, little Glenn was already working.

He and his nine-year old brother, Floyd, were assigned the onerous duty of walking almost two miles to the schoolhouse (that’s what they still called them back then, and many really were just abandoned houses that were converted to schools) to start the fire in the stove.

That way, the room would be warm by the time the teacher and other students arrived.

One cold morning in February of 1916, Floyd and Glenn arrived at the schoolhouse and unlocked the door, and were slapped in the face by the bitter cold wafting out of the still structure.

The two boys loaded the large, pot belly stove full of firewood, and took the kerosene can and soaked the logs thoroughly, as they always did. The kerosene accelerated the process of ignition, while also soaking into the logs enough to allow the flames to begin consuming the wood.

This morning, though, something went terribly wrong.

After letting the logs soak in the fluid for a bit, Floyd struck a match and dropped it into the pot belly stove. Almost instantaneously, the fire took on a life of its own. With a percussive “whoomp,” fire exploded everywhere, engulfing Floyd in a horrific sheet of flame.

Someone had mistakenly filled the kerosene container with gasoline.

Both of the boys were knocked to the ground by the mini-explosion, writhing in unspeakable pain. The flames quickly escaped the confines of the stove and violently swarmed throughout the front room of the schoolhouse.

On this day, their older sister Letha had accompanied them to school. She had been tending to other duties nearby, and heard the commotion coming from the schoolhouse. She saw the menacing flames and rushed to the front door, her horror growing by the moment.

She managed to open the door and coax her siblings out of the inferno. She ran for help; by the time she got back, Floyd was barely alive. He died shortly thereafter.

Little Glenn was mercifully unconscious for hours, as local doctors proclaimed him more dead than alive. His lower body had been ravaged by the flames.