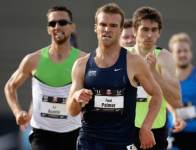 The Absegami High School grad was a 200-pound middle linebacker in football and a good, but not dominating track man.

Ford Palmer continues to write one of American track & field’s most surprising success stories of the 2014 season.

The 2013 graduate of Monmouth University has emerged from virtual anonymity to status as one of the nation’s most accomplished and improving runners at the parallel 1500 meter and Mile distances.

Back in his days at Absegami High School, Palmer was a 200-pound middle linebacker in football and a good, but not dominating track man.

But once he gave up on the gridiron game to focus on track, and switched to a vegan diet that helped cut his weigh to 156, he’s been a revelation. A powerful kick over the final 300 meters of the 1500 meter final at the USA Outdoor Championships, June 28, at Sacramento State University’s Hornet Stadium brought the 23-year-old Palmer up from the back of the pack all the way up to an impressive fifth place.