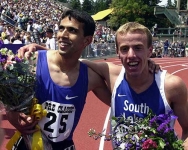 He said youngsters were also being lured away from athletics to other sports which was a problem the International Association of Athletics Federations (IAAF) had to solve.

"Usain Bolt is doing a great job for track and field, but he's casting a shadow over other races, which is very hard for those athletes, so it's the role of the IAAF to promote these to be more in the limelight," El Guerrouj said.