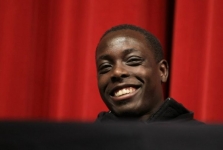 By Jim Lambert, The Star-Ledger

He made his decision official just a few hours before he broke the national high school indoor two-Mile record by running 8:39.15 in the elite men's race to place 8th at the Millrose Games at the 168th Street Armory in New York City. The old record was 8:40.0 by Gerry Lindgren of Rogers High in Spokane, Wash. in 1964. It was the oldest boys high school national indoor record in the book.