Eccleston, McDonald Triumph at HOKA ONE ONE Long Island Mile 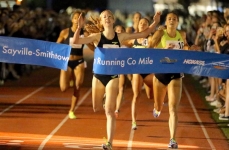 LONG ISLAND, N.Y. – A lively crowd, competitive fields and near perfect race conditions led to exhilarating finishes Wednesday evening at the HOKA ONE ONE Long Island Mile as Amanda Eccleston and Morgan McDonald kicked to victory in their respective Mile races at Bay Shore High School.

From the gun at the 5th edition, the rabbit Kenyetta Iyevbele shot to the front, but it was apparent early on that the field was content to run a more relaxed pace. While the rabbit ran hard to lead the field through in a quick 66 seconds, the entire field packed together and came through in 69 seconds.

Through the first lap Heather Kampf, Katie Mackey and 2017 race champion Emily Lipari led the way, while at 600 meters it was BAA athlete Lauren Johnson moving to the lead and pushing the pace a bit.

Johnson continued to lead as the runners came through the half way point in 2:19, while Kampf and Lipari in tow.

The third lap shaped the rest of the race. Johnson continued to set the pace, while Kampf, Eccleston, Mackey and Lipari ran off her shoulder, as the quintet separated themselves from the rest of the field. At the bell, the lead five remained the same, but it seemed only a matter of time before one of them made a more decisive move.

Stride-for-stride Kampf and Eccleston ran, both looking as if they might have the edge with 50 meters to go, but it was Eccleston with one more burst of speed to pass Kampf and cross the finish, arms raised and a smile on her face. Eccleston ran 4:32.58 to Kampf’s runner-up finish of 4:32.79. Eccleston, 29, earned her third race title (also 2015-2016).