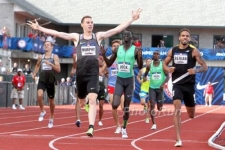 Clayton Murphy's proven middle distance range combined with his unparalleled progression over the past 4 years has sparked much speculation over which event the 2016 Olympic 800 meter bronze medalist would elect to race in this month's upcoming USATF Outdoor Track & Field Championships in Sacramento, Calif. Would he run the 800 meters where his 1:43.60 clocking earlier this April is the #1 world-ranked performance this year? Or might he step up to the 1500 meters where he has demonstrated great potential and his 3:51.99 in the Bowerman Mile two weeks ago is the American leader and is tied for #5 on the world leader board?

Murphy - never one to back away from a challenge - found a way to sidestep that tough decision: the rising star is planning to compete in both events. "Coach [Lee] Labadie and I kind of made the decision about the possibility to double toward the end of the indoor season," stated the Nike athlete in an exclusive interview. "We looked at the schedule for both and reviewed them. And we thought there was a possibility based on the schedule. So it was just going depend on training and how I felt leading up to it. Everything we've done and every decision we've made has been based around the double. All the races we've selected, the patterns of workouts, the patterns of races we did select, when they were, what they were have all been based around doubling."