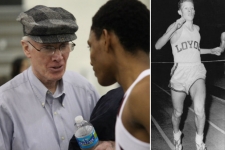 "If someone gives me a challenge, I try to beat them. That's the type I am."

The greatest Miler in Chicago's history still loves to run.

Even at age 74 — 52 years after setting a world record that stood for 10 years — Tom O'Hara relishes a 30-minute jog around his local park.

"It's probably not even a 10-minute Mile pace anymore, but I'm not interested in that," said O'Hara, the former star at St. Ignatius College Prep and Loyola University Chicago. "I just still generally enjoy it. It's a real break for me."

Later in 1964, he made the U.S. Olympic team that competed in Tokyo, but he got the flu and didn't qualify for the 1500 meter finals.

"I was really disappointed because some of the competitors I know I could have beat," O'Hara said. "But that's just the way it is."

But Knoedel said O'Hara would never brag about his times.

"Tom is a very quiet, unassuming person who had an inner drive that few people possess," Knoedel said.

O'Hara said he didn't know where his determination came from, but it was always there. When he was in second grade, he would race his sister and friends about a Mile from their home at Fullerton and Damen to St. Bonaventure School near Clybourn. He hated to lose.

"If someone gives me a challenge, I try to beat them," O'Hara said. "That's the type I am."