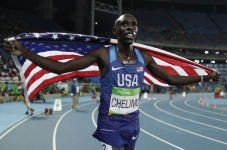 The lineups for the 2018 Camel City Elite Races in Winston-Salem are taking shape and already include notable star power for what will be the event's richest purse to-date.

The sixth annual event at JDL Fast Track, offering $75,000-plus in prize money, will take place at 2:00pm on Saturday, Feb. 3. Camel City is a fast-paced meet in which professional runners, and a few collegians, compete within a two-hour time block. Admission will be $10.

Camel City's signature moments have come in the Mile races, where the fastest times in North Carolina track history have been recorded. Matthew Centrowitz's 3:54.02 won the Mile in 2016, just six months before he would win the United States' first Olympic gold medal in the 1500 meters since 1908. A year earlier, three-time Olympian and Duke alumna Shannon Rowbury set the North Carolina mark for women, clocking 4:22.66.