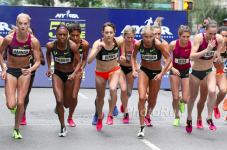 2014 defending champion Jenny Simpson joins past winners Shannon Rowbury, Matthew Centrowitz, Nick Willis, and Bernard Lagat in event to be televised live on WABC-TV, Channel 7 and ESPN2 from 1:00 to 1:30pm on Sunday, September 13.

6,000 runners are expected to run past thousands of supporters lining the NYRR 5th Avenue Mile course in races throughout the day, including the Youth Mile featuring local 11-year-old world record holder Jonah Gorevic, the NYPD/FDNY Mile, and other local elite and notable age group races.

Defending women’s champion, American Jenny Simpson, will lead an elite field of runners, including past champions Shannon Rowbury, Matthew Centrowitz and Bernard Lagat of the United States, and Nick Willis of New Zealand, at the 35th NYRR 5th Avenue Mile on Sunday, September 13, it was announced today by Peter Ciaccia, president of events for New York Road Runners and race director of the TCS New York City Marathon.

“We are thrilled to welcome back to the NYRR 5th Avenue Mile defending champion Jenny and past champions Shannon, Matt, ‘Kip’, and Nick, to lead an outstanding group of Milers in this year’s race,” said Ciaccia. “This is the running world’s most iconic road Mile. Our Men’s and Women’s pro races will be the finale to a great day for thousands of runners, and will be broadcast live locally on WABC-TV, Channel 7, nationally on ESPN2, and globally on various international sports networks.”

The 2015 NYRR 5th Avenue Mile will be televised live from 1:00 to 1:30pm ET on WABC-TV, Channel 7 in the New York tri-state area and for the rest of the nation on ESPN2. Both the men’s and women’s professional races will be featured live on the broadcast of the world’s largest road Mile race. Interviews and highlights of the Youth Mile and other races will round out the broadcast. Viewers can also watch live via the WATCH ABC app, and via WatchESPN on computers, tablets, smartphones, Amazon Fire TV and Fire TV Stick, Apple TV, Chromecast, Roku, Xbox 360, and Xbox One for those who have video subscriptions from affiliated providers. Coverage will also be available on demand at abc7NY.com. International viewers can watch the broadcast via a variety of global broadcast partners (international viewers should check local listings).

Also featured in the live broadcast will be highlights from earlier in the day, including the NYRR 5th Avenue Mile Youth Mile (ages eight to 14), featuring 11-year-old Mile world record-holder Jonah Gorevic of Rye, NY. Jonah will be joined by 200 young runners in the famed run down 5th Avenue. New this year is the Youth Wheelchair Invitational Exhibition, including seven kids ages 11 to 17 from wheelchair racing teams in the New York tri-state area, which will follow the adult wheelchair and handcycle race at 8:30am to kick-off the day’s age-group and specialty races.

“From kids to seniors, to the new Youth Wheelchair Invitational Exhibition, the NYRR 5th Avenue Mile celebrates runners of all ages and abilities,” said Michael Capiraso, president and CEO of New York Road Runners. “6,000 runners will make the trip down 5th Avenue past people cheering from the Met at 80th Street to Grand Army Plaza at 60th Street. The event is really about a community coming together to share in the excitement of a unique New York day and one of NYRR’s most prestigious events.”

Simpson, 29, of Boulder, CO, is the defending NYRR 5th Avenue Mile champion and made history last year as the first woman to win three NYRR 5th Avenue Mile titles (2011, 2013, 2014). She won the 2011 IAAF World Outdoor Track and Field Championships at 1500 meters and returned to take the silver in 2013. In 2014, she captured the IAAF Diamond League series title at that distance. Simpson has a 1500-meter personal best of 3:57.22, the third-fastest American performance in history.

“For the fifth season in a row, I can't wait to finish my racing calendar at the NYRR 5th Avenue Mile,” said Simpson. “After countless Miles run all around the world, I can't wait to return to the USA and race my final Mile of the year in front of a home crowd.”

“I am thrilled to be ending my season with the NYRR 5th Avenue Mile,” said Rowbury. “New York Road Runners has a history of putting on the world's top road races and I always love being a part of their events. After a long season on the road, racing on home soil is a great pleasure.”

“I love running in New York and look forward to my third NYRR 5th Avenue Mile,” said Centrowitz. “This will be my third race in New York this year. I won the NYRR Wannamaker Mile at the Millrose Games and ran an 800-meter PR of 1:44 at the New York Diamond League meet.  I hope this one goes as well. I have lots of family on the East coast and they always come out to support, which means a lot to me.”

Leading up to the professional men’s and women’s races, a wide variety of Mile races will be held during the day including the NYPD/FDNY Mile, the George Sheehan Memorial Miles for runners 60 to 69 and 70+, and the women’s and men’s NYRR Road Mile Championships, featuring top local athletes including Paralympic 1500-meter world record-holder Mike Brannigan of Northport, NY.

Former New York Giants running back and radio personality Tiki Barber will also be running in one of the day’s Mile races.

For more information about the NYRR 5th Avenue Mile, visit the event webpage at nyrr.org. Media information can be found before race day on the NYRR online media center, including professional athlete fields and a downloadable media guide.