Bringing Back the Mile 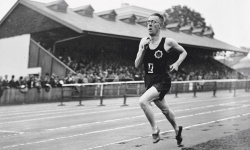 To race a Mile is to take part in one of running’s most iconic events. It’s also the ideal way to test your fitness and break out of one-pace training

By Edward Price, The Guardian

In the minds of most runners, the marathon looms large as the ultimate distance. It is both a supreme test of endurance and an achievement that even non-runners can appreciate and admire. There’s no doubt that the marathon is captivating for participants and spectators alike, and its position as endurance running’s blue-riband event is justified. But for me, and many others, it has a rival. A distance with just as much heritage and appeal; a distance that involves speed, tactics and excitement: the Mile.

At 1609 meters, or just over 4 laps of a track, it is in many respects the perfect distance: short enough to be fast and furious, but long enough to incorporate the surges and jostlings of a proper distance event. Great to watch and even better to race, the Mile used to be running’s most talked about event. For years athletes tried and failed to break the seemingly impenetrable 4 minute barrier, in much the same way that two hours now stands as the ultimate challenge for marathoners. When Roger Bannister finally broke 4 minutes in 1954, the floodgates opened, and emboldened with the knowledge that it really could be done, many others soon broke it too. British athletes would go on to dominate the event in the 1980s, with Coe, Ovett and Cram all breaking world records. The current record is held by Hicham El Guerrouj, who ran 3:43.13 in 1999.

But it isn’t only competitive athletes who can benefit from racing a Mile. It is the ultimate sharpener, perfect for testing your fitness levels: short enough that you can really push yourself, even at the first attempt, but long enough to mean that you’re still running, rather than sprinting. Those of us who lack the technique and body shape of sprinters can still compete.