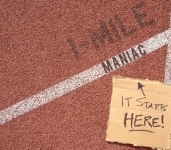 Ever appropriate, this conversation with conversion happened on the 47th anniversary of Jim Ryun becoming the first high schooler to break the four-minute Mile.

But you'd think that, well, the mile only means something to Boomers, you know? Folks who were born while John F. Kennedy was alive.

Until I watched an interview with Kyle Merber — who ran the time — on RunnerSpace.com and he had the exact same thought as Williams.

Reliving the moment, Merber said afterward, "I didn't have it in perspective yet until I realized the Mile conversion. I guess the American — you know, you always think, 'What's your Mile time?' Once I realized, 'Whoa, that's a 3:52.' Then I thought something just happened."