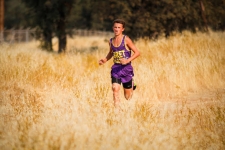 “My favorite event is probably the Mile... It’s not too short, but not too long,” said Landis, who also ran and set personal records in the 800 and 3,200 in the track season. “(Getting records) was nice knowing that all my training and running was paying off.”

Landis, who put together one of the most successful debut years for the Bullfrogs in recent memory, has been named Bret Harte Highschool’s 2014-15 male Student-Athlete of the Year.

“He’s a very hardworking young man (with) a real strong desire to do well and that makes a big difference,” said Bret Harte cross country and track coach Keith Maurer. “Plus he’s talented.”

“This is pretty big for me, being only a freshman,” Landis said of the honor. “I could not have imagined doing so well to start high school.”