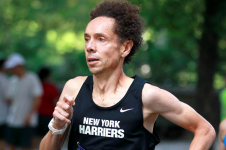 Malcolm Gladwell, author of The Tipping Point and other best-selling nonfiction books, ran 5:03 at Sunday's Fifth Avenue Mile in New York. It was his third consecutive appearance at the race.

Gladwell ran 4:54 at last year's Fifth Avenue Mile. But perhaps his running hasn't reached a tipping point of age-related slowing, because he also ran 5:03 in 2013, when he was 51.

Gladwell, a staff writer for The New Yorker, he's been running with more structure and dedication since joining the New York Harriers.

In addition to being an ambitious age-group runner, Gladwell is a strong fan of elite racing. During last month's IAAF World Championships, he revealed on The New Yorker's website that he has a photo of 1500m world champion Asbel Kiprop as a screensaver on his phone.