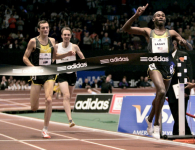 When James Li began recruiting Bernard Lagat in the spring of 1996 to come run for him at Washington State, he figured the young, talented Kenyan could win several national titles for the Cougars. One of his runners, Eric Kamau, who was Lagat’s running coach in Kenya, spoke highly of the then 21-year-old, but Li didn’t want to set his expectations too high – he felt Kamau was slightly exaggerating with his praise.

Li, currently the cross-country coach at Arizona University, now knows just how wrong he was to set such limits on Lagat’s abilities.

“We definitely knew he was really good,” Li said in a phone interview with the Washington Post earlier this week. “But no, you don’t expect someone to be that good.”