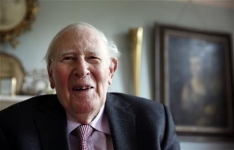 "Bannister's 3:59.4 remains part of track and field lore, a symbol of boundary-busting endurance that stands the test of time."

It was on a wet, blustery spring day — May 6, 1954 — that the lanky English medical student became the first runner to break the fabled 4-minute barrier in the mile, a feat that many had thought was humanly impossible.

Helped by two pace makers, the 25-year-old Bannister completed four laps around a cinder track in Oxford in 3 minutes, 59.4 seconds, a milestone that captured the world's fascination and still resonates today.