Brown’s Ned Willig Burns Up the Track at Stanford 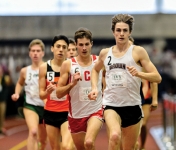 Ned Willig ’16 may be a newcomer to the men’s track and field team, but he is already making his presence known both on the squad and in the Ivy League. At the Stanford Invitational last weekend, Willig ran the 800-meter run in 1 minute, 50.20 seconds, tying Gbolahan Fatuga ’96 for the third-fastest time in school history. Willig’s time was also the second-fastest time recorded in the Ivy League this season. He continued to impress at Stanford by crossing the finish line of the 1500-meter run in 3:45.53, the best performance among all Ivy League runners this year and the eighth best in Brown’s history. For his impressive runs, Willig has been named The Herald’s Athlete of the Week.

Herald: How does it feel to start off the season so successfully?

Willig: As the first event of the spring track season, I’m very happy with how I started...