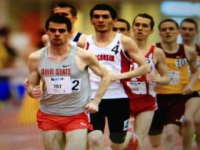 The quest to "break four" still inspires the latest generation of U.S. runners

David Hunter is on a roll. This piece on Chris Fallon of Ohio State, and the pursuit of the 4 minute Mile, is a fun read. The 4 minute Mile has become a litmus test to the growing strength of American distance running. Running four laps in 60 seconds a piece has been done by just over 396 Americans in the past fifty years. Sometime this spring, we will hit 400 Americans who have broke 4 minutes for the Mile!

The 4:00 Mile -- there is something so perfect about that distance, that time, and that goal. 4 laps in 4 minutes, averaging less than 60 seconds for each lap. No other achievement is so well known, so perfectly crafted to inspire, and still so exclusive after more than 50 years since Roger Bannister made the inaugural break though on the Iffley Road track in Oxford on May 6th, 1954.

Other sports may claim to have pinnacle goals equal to the majesty of the 4:00 Mile. But they would be wrong. Golf's hole in one?  Too much magical luck involved. Bowling's 300 game?  Too easily achieved. Basketball's triple double, baseball's .300 batting average or 20 win season, hockey's hat trick - all are events to be celebrated, to be sure. But none can really compare to the dedication, the solitary achievement, and the grandeur that accompany breaking 4 minutes in the Mile.

Running a sub-4:00 Mile is held in such high regard that the sport we love keeps slavish account of all those who have achieved this special goal. Track & Field News - one of the sport's most widely-read and respected publications - pays subtle but sincere tribute to each new American to join this exclusive club. TFN does so by noting each new American sub-4:00 performance with a number that indicates how many Americans - including this most recent sub-4:00 performer - have now broken the magical barrier.

This year there is a special sense of anticipation surrounding new U.S. entrants into the sub-4:00 fraternity. The excitement builds as the total number of American Milers who have broken 4:00 closes in on 400 - a total that will likely be surpassed sometime prior to Mother's Day. But it wasn't always that way. After Bannister's groundbreaking Mile in the spring of 1954, it was over three years until the first American [Cal's Don Bowden - TFN's #1] turned the trick. By the 10th anniversary of Bannister's feat, only 9 Americans had broken 4:00. Slowly, the pace of the American onslaught on 4:00 gradually rose, but ultimately plateaued. And for decades roughly 6 new American Milers entered the Sub-4:00 Club each year. By the 20th anniversary of Bannister's feat, 69 U.S. Milers had dipped under 4:00; by the 30th anniversary, 133 had done so; by the 40th anniversary, 196 U.S. Milers had broken the coveted standard; and by the 50th anniversary, the total number of American Milers under 4:00 had risen to 259. But since the 50th anniversary of Bannister's legendary Mile, there has been an explosion of elite Miling in the U.S. Since then - not quite 9 years - 138 new American sub-4:00 Milers as of this writing - over 15 new members per year - have been added to this exclusive list. In 2012 - last year alone - 23 new American Milers joined the sub-4 ranks.