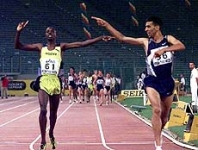 The mind-boggling record came in a real race, one that was not decided until the final strides; also 16 men overall go sub-4

As hard as it is to imagine a man running a Mile in 3 minutes, 43.13 seconds, the shock in Rome's Stadio Olimpico on Wednesday, July 7 was not that 24-year-old Hicham El Guerrouj of Morocco set a world record at that storied distance. Nor was it the fact that Noah Ngeny, who is only 20-years-old and had never broken 3:50, also smashed Noureddine Morceli's six-year-old mark of 3:44.39 by almost a full second, finishing in 3:43.40. No, what stood out on that warm, still night was this: The mind-boggling record came in a real race, one that was not decided until the final strides.

The last race in which two men broke the Mile record was in 1958, when Herb Elliott and Merv Lincoln of Australia ran 3:54.5 and 3:55.9, respectively, to better Derek Ibbotson's mark of 3:57.2. For some years now, world records have been pursued with a kind of sterile thoroughness. Record attempts have become less true races than lucrative time trials in which one runner chooses his rabbits, names his pace and then tucks in behind them while they do his bidding. The usual result is the spectacle of a solitary man straining against the clock over the final lap.

Last week's race began like other recent world record attempts, with El Guerrouj following two Kenyan pacemakers through 440 splits of 55.07, 1:51.58 and 2:47.91. When El Guerrouj pulled four yards clear of Ngeny, another Kenyan, down the final backstretch, it seemed that his only remaining opponent was the clock. But as he turned into the homestretch, he glanced at the huge video screen at the end of the stadium and saw, to his horror, that Ngeny had clawed back onto his shoulder. He had to dig hard to hold off this upstart and become the first man to own the full set of four "Mile" records: 1500 meters and the Mile, indoors & out.

Surely there is a lesson in this race for a sport desperate to reclaim its old popularity. Rarely does a would-be record setter permit anyone in the race who might beat him. That is the deal a meet director must make with the devil--otherwise known as the athlete's agent--to guarantee the presence of a star. El Guerrouj, having established the 1500 record of 3:26.00 at this Rome meet last year, probably could have kept Ngeny out of this Mile. It cannot have hurt that Ngeny was one of El Guerrouj's rabbits on three occasions last year, including the record-setting 1500.

At 5'9" and 126 pounds, El Guerrouj is also the lightest runner to hold the Mile record--and, perhaps as a result, the smoothest, with a gorgeous light stride that betrays no effort.

He was born in Berkane, a small city in a citrus-growing region near Morocco's border with Algeria. Like Said Aouita, whom El Guerrouj calls the "hero of every Moroccan runner," El Guerrouj first fell in love with soccer. He might still be struggling to become the world's best short goalkeeper but for his mother's insistence that he find a cleaner sport. Encouraged by a teacher, El Guerrouj began running at 15 and eventually was invited to his country's training center in Rabat.