A Mile in Your Flats 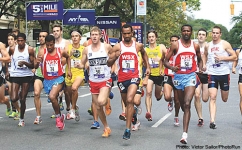 The road Mile is simultaneously alluring and terrifying; it's also gaining in popularity; as American as baseball and apple pie

While the majority of the running world spends its time focused on how to cover 26.2 miles as quickly as possible, it's curious why more runners, especially seasoned ones, don't try to run just 1 Mile as fast as they can.

As it turns out, more people are giving it a shot. In 1999 there were 330 road Mile races in the U.S. Today, the tally is more than 600 such competitions, according to Running USA statistics.

"There's no doubt there are more people racing the Mile," says Ryan Lamppa, media director at Running USA and founder of the Bring Back the Mile campaign. "It's part of the second running boom -- every race distance has increased the number of finishers and the road Mile is part of that."

So what's the attraction to the Mile? For Lamppa, it's simply "America's distance."

"It's part of our nomenclature. Nothing against the metric system, but nobody asks 'What's your kilometer pace?' here," he says. "Part of the reason why we hold on to the Mile is because it makes us American. It's like baseball and apple pie."

Patriotism aside, the Mile is also the scariest race for many a road runner, even those who train at a high level. For starters, there's nowhere to hide in the road Mile -- it's a finite measurement of ability. There's an instant judgment of whether a time is fast or slow, no calculations required. Serious runners go into it with the understanding that the kind of pain they will feel is just as easily avoided at longer distances. Take one look at the finish line photos of the 2013 USA 1 Mile Road Championships at the Drake Relays, and there's little doubt that it hurts. Grimaces all around. Pro runners hunched over, trying to regain composure. The Grand Blue Mile, for a moment, looks a little green.