A look back at Seb Coe’s golden years 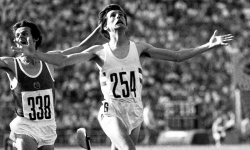 Politics and IAAF presidency aside, let’s not forget what a fantastic athlete Coe was: Olympic champion, Mile world record holder and more!

Every athlete usually remembers a moment where they were drawn into the sport. For me, I was hooked after watching the Seb Coe and Steve Ovett showdown at the Moscow Olympics in 1980. Aged 11, I watched their first clash over 800 meters at a friend’s house and then challenged him and his brother to a race around the block. Two laps, of course.

I was an Ovett fan to start with. Yet before long I converted to Coe. I always loved an underdog and after being beaten by Ovett in the 800m Coe was definitely the outsider in the Moscow 1500m as he took on a runner who had been undefeated at the distance for three years and 45 races.

Coe’s comeback victory in Moscow captured my imagination. I was fascinated that such a frail physique could conceal so much speed and strength. Then there was his famed ‘double kick’, which he used to see off Ovett and Jurgen Straub.

Four years later, I rose in the early hours of the morning to watch the BBC broadcast of Coe firstly finishing a gallant second to the great Brazilian Joaquim Cruz over 800m in the Los Angeles Olympics before making another terrific comeback to win the 1500m ahead of Steve Cram.