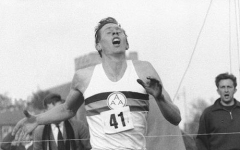 In 1954, gasping with effort on Oxford's Iffley Road track, Roger Bannister ran the first 4 minute Mile. Now a prominent neurologist and chairman of the British Sports Council, his celebrity is undimmed, although critics say his idealist's view of athletics is anachronistic.

Roger Bannister was special, so overwhelmingly applauded that it seems evident the style of the man and his accomplishments must have fulfilled some deep need of his time. Derek Johnson, the Olympic silver medalist at 800 meters in 1956, was a contemporary. "His every ingredient touched the British psyche," says Johnson. "He embodied the trust the nation places in the university and professional classes. He appealed to the tradition of amateurism—the idea of pursuing sport on one's own terms, of keeping it in perspective. The Mile itself had certain hypnotic properties then—4 laps to be done in 4 minutes—and finally, he just looked good running. He was tall, with that long stride, and always moving with a degree of suppressed anguish."

Anguish was essential in an era when running was characterized by unrestrained sentiment. "The art of running the Mile," wrote Paul O'Neil, covering the Bannister-John Landy "Miracle Mile" for the first issue of SPORTS ILLUSTRATED in August 1954, "consists, in essence, of reaching the threshold of unconsciousness at the instant of breasting the tape.... Few events in sport offer so ultimate a test of human courage and human will and human ability to dare and endure for the simple sake of struggle." Bannister seemed to lend substance to such heroic judgment by collapsing a few yards past the finish in his major races, but the reason for this was not inherent to a well-run Mile—he did not train enough to withstand the strain of racing, a fact he now freely admits. Yet at the time Bannister's own prose contributed to the view that a fast Mile was an act of supreme passion. "It was intensity of living, joy in struggle, freedom in toil, satisfaction at the mental and physical cost," he wrote in 1955 in his book, The Four Minute Mile. "Whether as athletes we liked it or not, the 4 minute Mile had become rather like an Everest—a challenge to the human spirit."

In a London park, Roger Bannister below with his 4 children (left to right, Charlotte, Thurstan, Erin and Clive) 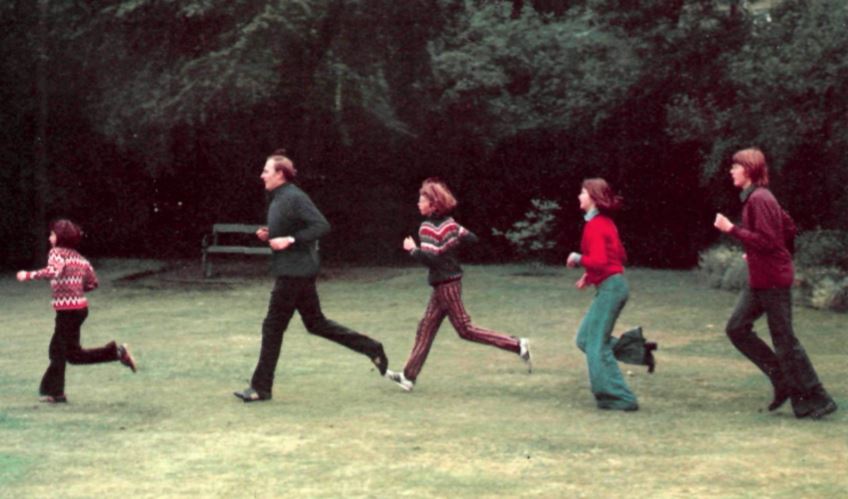