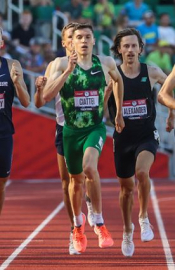 At Virginia Tech, Ciattei was the 2018 NCAA 1500m and indoor Mile runner-up and with his Hokie teammates, also won the NCAA Indoor Distance Medley Relay and the National 4x800 Relay Championships.

PITTSBURGH – At the 11th Fleet Feet Liberty Mile on a warm Friday evening in downtown Pittsburgh, the pro races ended in two thrilling finishes as Vincent Ciattei of...

DES MOINES — The Grand Blue Mile presented by Wellmark Blue Cross Blue Shield returned to downtown Des Moines on a beautiful Tuesday evening, for the first time since 2019, and the event again hosted...