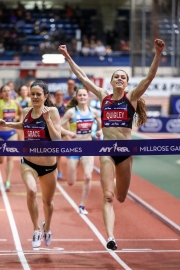 She is also a volunteer assistant coach for the Portland State cross country and track & field programs.

FUN FACT: Colleen has modeled since age 13, but now running is her #1 priority.

When she’s not running, the Rio Olympian loves spending time in her kitchen.

Though we’re barely three months into 2019, Colleen Quigley, a 2016 Olympian in the 3000 meter steeplechase, is already hitting her stride. Earlier in February, the 26-year-old...

Shelby Houlihan has spent the past two years destroying anyone who dared cross her path at a national championship, winning eight straight titles...

My favorite part is the habit tracker, where I keep a record of all the habits...

For most of us, just getting up in the morning can be a hurdle. But because Colleen Quigley takes real hurdles in stride, it’s no surprise that her morning routine is a...