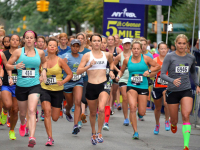 “The Mile is unique because it requires both endurance and speed training to hold race pace - and also later in the final stretch to kick hard when you are hurting."

By Jen A. Miller, The Philadelphia Inquirer

This summer, I ditched my usual fall marathon training and decided to focus on shorter races, sprinkling my calendar with 5ks and 10ks and leaving open the possibility of doing a late fall half marathon.

My main race, though, is the Fifth Avenue Mile, which is in New York City on Sept. 13. It's just one Mile. How much could it hurt? And how hard could training be?

Answers: A lot. And hard.

"As distance runners, we have gotten accustomed to the strategy of the longer races. We like warming up and settling in to a pace," said Gerard Pescatore, a Road Runners Club of America certified coach - and my coach. "We tend to make adjustments along the way as necessary. The longer races are comfortably uncomfortable. There is time to adjust and time to zone out."

The Mile, though, is a different animal, especially for someone like me who is accustomed to racing longer distances. We reach a higher heart rate and fatigue stage almost instantly.

"Even though it's over quickly, time appears to stand still while you're racing a Mile. Seconds become an eternity. The runner feels stuck in a moment he or she can't get out of," Pescatore said.

Running the Mile well is tricky too, says Ryan Lamppa, founder of the Bring Back the Mile campaign, which works to make running the road Mile popular. "To do so requires both endurance and speed training to hold race pace - and also later in the final stretch to kick hard when you are hurting," he said.

This meant much different training. Instead of building miles and endurance to get me through a long race, I hit the track once a week to do 400 meter repeats. I slogged up and down Haddonfield's Center Street Hill, which my local running friends and I now call - somewhat affectionately - "Torture Cake" because the hill has three tiers. I got serious in the weight room, spending over and hour each week strengthening my legs, but also my core and upper body because those muscles would come into play more in the Mile than in a longer race. Saturdays I turned over to the stadium at Haddon Township high school for a workout that involved stairs, but also sprints, walking lunges, high knees and skips with the goal of building explosive speed.