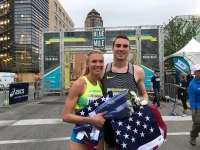 DES MOINES - Grand Blue Mile officials from Wellmark® Blue Cross® and Blue Shield® and the Drake Relays presented by Xtream powered by Mediacom® have announced preliminary fields for the 2022 USA Track & Field (USATF) 1 Mile Road Championships presented by Toyota® set for Tuesday evening, April 26, in downtown Des Moines. A world class field of elite Milers will headline the BBTM Featured Event along with more than 2,000 participants from across the nation who will compete among the competitive and community recreational divisions, in person or virtually.

“We’re excited to continue our longstanding tradition of welcoming America’s best athletes to the Grand Blue Mile in partnership with the Drake Relays,” said Chris Verlengia, Wellmark’s marketing activation and alliance manager and Grand Blue Mile co-race director. “These athletes embody the true spirit of the Grand Blue Mile — a commitment to healthy habits and the perseverance to achieve their goals. Whether you’re a running enthusiast aiming for a new personal best or simply enjoying a walk with your family, we can’t wait to see you on April 26.”

This year’s race returns to downtown Des Moines and features a top prize of $5000 each for the men’s and women’s champions. Overall, $25,000 in national championship prize money going 10-deep per gender will be awarded.

In the men’s division, returning is two-time Olympian in the 800m and 2017 GBM champion Clayton Murphy who will be joined by:

In the women’s division, Emily Lipari returns in pursuit of a third championship, having won the event in 2018 and 2020. She will be joined by:

Set the Pace and win $10,000 for your community
Also returning to the Grand Blue Mile is Wellmark’s Set the Pace Challenge. As part of the challenge, the community with the highest percentage of residents participating in Grand Blue Mile ─ either in person and/or virtually ─ will win $10,000 to use on a project that promotes safe, inclusive and accessible places in which to be active.

Participation in Grand Blue Mile will be tracked via the ZIP Code of each registrant and weighed against their community’s total population. The current leaderboard (city/ZIP) is:

“With registration open through April 26, there’s still plenty of time to get your community in the running for this impactful award,” said Verlengia.

Register today!
Registration for the in-person event is $20 for youth and $25 for adults and the virtual event is $25, all participants will receive a Grand Blue Mile event shirt and race bib. As part of Wellmark’s commitment to improving the health of Iowans, all proceeds benefit Iowa Kidstrong youth fitness programs and support student participation in the annual Drake Relays.