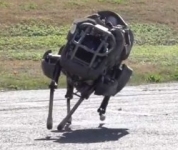 Match race with the Roger Bannister of robots and humans next?

The Cheetah robot was born in 2012. The speedy four-legged bot could run at 29 miles per hour — outpacing Usain Bolt — while tethered to a power supply.

Now, the cat's off the leash.

Boston Dynamics introduced WildCat, a wireless version of Cheetah, on the group's YouTube channel. The robot clocks in at a top speed of 16 mph, slower than its wired predecessor, but still faster than many humans. WildCat can run a less-than-four-minute Mile.

Without a cord, the new generation of robot can run outside of the lab.

Boston Dynamics' video of WildCat in action shows it running in a parking lot. WildCat uses "bounding and galloping gaits" and can run on all types of flat terrain, the group noted in the description on YouTube, and can both move in a straight line and cut turns. Its motor noticeably hums.