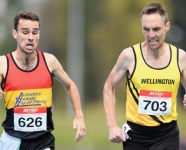 "Today I was looking at qualifying for the Olympics and there is a lot of bonus points for running at nationals."

Willis kept his Tokyo Olympic ambitions on track by achieving his twin objectives of securing the national title and a sub-3 min, 44 sec time to give his world ranking points a welcome boost, but it was a mighty close battle as the 36-year-old veteran prevailed by just 0.05 sec from Oakley in 3:42.94.

Willis pushed the accelerator with 200 meters to go and, entering the home straight, opened up a 7-8 meter lead, yet in a dramatic twist Oakley found a second wind and gradually ate into the New Zealand record-holder’s advantage.

In the mad dash for the line Willis held on for a narrow but welcome victory in his pursuit of a fifth successive Olympic appearance.

‘‘I hate leading. I like sitting pretty in the pack and to use my kick at the end, but today I was looking at qualifying for the Olympics and there is a lot of bonus points for running at nationals [and running a quick time].