"The Mile has been my ambition. All the really great names are there: Bannister, Landy, Elliott, Snell. These men are idols to me. Now the ambition is realized. I've done what I set out to do."

At Courtemanche Stadium in the market town of Rennes near the Brittany seacoast west of Paris, the crowd was up and yelling—"Vas-y Ja-zy!"—in rhythm, as a crowd would yell at a football game or a political rally. The cry meant, "Go, Jazy!" The night was clear and chill, with no wind to disturb the acacia trees and weeping willows around the stadium. Down on the track, which had been ripped and pocked by the spikes of earlier racers, a strangely birdlike man was more than two seconds behind the world record for the Mile after two laps. His head lolling, eyes oddly vacant as if looking inward, shoulders hunched, elbows thrust back like wings, he pounded on at the pace set by his human rabbits. Michel Jazy (SI cover), the finest middle-distance runner of our time, chased the record in a race that had been as carefully planned as a ballet.

The rabbits were Jean Kerveadou, Jean Wadoux, Gerald Vervoort and Claude Nicolas, men Jazy calls mes co-pains, his pals. Two hours before the race, as he jogged anxiously on a small inner track, Jazy had stopped to ask a reporter: "Do you think they will help me? Without them I cannot hope for anything." But the rabbits had already sworn to help. After Jazy broke the European Mile record, on June 2 at the stadium in Saint-Maur, a Paris suburb, Vervoort offered to pace him in the next major effort. A week later in Lorient, Jazy set a European record in the 5000 meters with the pacing of Kerveadou, among others. When they arrived in Rennes, Nicolas said, "I must know what you are going to do."

"Try for the record," said Jazy.

"Then I will sacrifice myself if you wish," said Nicolas. "So will I," Wadoux said. "I will take the second lap." "The third is mine," said Vervoort.

The plan on June 9 was to assault Peter Snell's record by running a typical Jazy race of almost equal quarters with the first and last laps a bit faster. As they waited to begin, a television camera broke down. Jazy fretted and complained through a 10-minute delay. At the gun, Kerveadou ducked his head and dashed away as if he had thrown a rock at somebody's window. Keeping up, Jazy finished the first 440 yards in 57.3, a second behind Kerveadou. Peter Snell had done it in 56 seconds.

Wadoux charged in front for the second lap and brought Jazy to the halfway point at 1:56.5, two and a half seconds behind Snell. Vervoort assumed the lead until Jazy, who had been running second, moved smoothly ahead 20 yards before the beginning of the last lap. Friends stationed around the track were calling out the times to Jazy. At three-quarters, Jazy was 2:57.2, three seconds behind Snell. But the last lap is the Jazy lap. The last 220 yards is where he is almost unbelievable. "Vas-y, Ja-zy!" yelled the crowd. Jazy was running evenly and easily, stretching out the stride that is longer than one would expect from a man of 5 feet, 9 inches and 143 pounds.

Approaching the last bend, the rabbits were falling back, burnt out. It was Jazy now, alone, against the clock. And so he turned it on. His calm, almost bored expression changed into one of pain. His lips tightened. He quit puffing his cheeks. Running like a sprinter, flying away from the field, driving toward the finish, he went for the record.

Jazy crashed through the tape and, slowing, looked away disgustedly. He was convinced he had failed. He pointed toward the torn track in anger. "This track is rotten," he said." What a pity we could not have run at the beginning of the meet. The track would not have been plowed up by the regional races. I know everyone must run at the meet, but I did warn that I would attempt a great coup in Rennes."

His warning had come weeks earlier. He had said: "In the first fortnight in June I will be ready to strike a great coup on the distances that are dear to my heart—the 5000 meters and the Mile." At that time Jazy held world records in the 2000 meters and the 3000 meters. Sadly he walked toward the infield. Jazy had very much wanted Snell's record, and he thought it had escaped him. He hardly glanced up as the public address speaker began to crackle.

Jazy jumped up and down. "Merci! Merci!" he yelled to his co-pains. He hugged and kissed them. Herding his pals with him, Jazy trotted around the track waving his arms in the tour of honor. The crowd of 3,000 stood and applauded as this man—high-waisted, thick-bodied, with long thin legs and an almost too pretty face—leaped and danced past the bleachers. Michel Jazy had become the first Frenchman to hold the Mile world record since Jules Ladoumègue in 1931. A night of glory for French sportsmen. 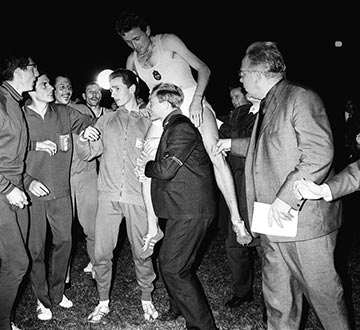