Utah runner produces feats for the ages (or aging) 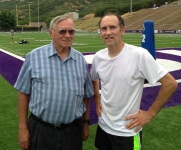 OGDEN — By way of introduction, Brad Barton is a motivational speaker, author and magician who urges audiences to “do something hard” and embrace challenges. For a man who is raising six kids, 40 beehives and 60 fruit trees, he seemed to have taken his own advice and then some, but he decided it wasn’t enough. He undertook a new challenge so physically demanding that it often left him in tears and literally sick with fatigue. Barton, a former five-time All-American distance runner at Weber State, took up competitive running again after a 17-year layoff — at the age of 48.

The short version of what happened next is that he clocked 9:06.68 in the 3000 meter steeplechase at a meet in Tennessee early this summer and later a 4:17.54 Mile in San Diego — times that mean nothing to most readers, so a little perspective is in order. His steeplechase time would have won that race at this year’s championship meets for the Western Athletic, Big Sky and Mountain West conferences. He knocked a whopping nine seconds off the previous 45-49 age-group world record set by Norway’s Nils Undersaker in 1984. As for his Mile time: No man his age or older has ever come close to running so fast in that distance.

The Times of San Diego covered the event extensively under the headline: "Magical Olympian Mile: Brad Barton Oldest to Go Under 4:20." The story quoted meet announcer Paul Greer's reaction to Barton's feat: “What we saw tonight was greatness. One of the best masters performances ever, at least in San Diego.”