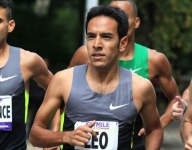 BBTM Note: Jon Rankin, sub-4 Miler, UCLA alumnus and California prep standout submitted this good preview of two fellow American Milers launching their 2013 seasons at the Carlsbad 5000. He provides five reasons why either of them can become the first American to win since Doug Padilla in 1990 and Deena Kastor in 2002. Jon is the co-founder of The Run Project, a website that connects runners with non-profits that use running to save the world and founder of Giving Athletics, a non-profit company that brings running programs to underserved communities and schools.

Doug Padilla was the last American male to win the Carlsbad 5000 back in 1990.  That was 23 years ago. Thankfully American Miler, Leo “the lion” Manzano is going to do his very best to end the American drought this coming Sunday. As the surprise silver medalist in the 2012 Olympic 1500 meter final, Manzano earned the right to be considered a threat in every race he enters. Even though this is his debut at 5000 meters (road or track), Manazano has had a career in which pulling off surprise performances has become his trademark.

Here are a few reasons why it’s very likely that Manzano will win in Carlsbad:

Reason #2 Bernard Lagat – Manzano has had success against top 5000 meter competition outkicking distance running legend, Bernard Lagat, on multiple occasions in both the 1500 meters and the mile. Lagat is the current American record at 5000 meters at 12:53.60 and former World Champion at the distance, wining gold in Osaka in 2007. Lagat is the second fastest 1500 meter runner of all-time with a personal best of 3:26.34. Manzano pedigree as a miler and success against one of the greatest milers of all-time provides a strong case for his potential as a threat at 5000 meters.

Reason #3 A Proven Tactician – If there’s one quality every distance runner should strive to hone it’s the ability to race tactically. Manzano is one of the best race tacticians in the world. He has an uncanny knack for putting himself in the right position at the start of nearly every race. And he holds and/or even improves upon that position throughout the race to be within striking distance of a win when it’s time to unleash his unbeatable finishing kick.

Reason #4 Leo is full of surprises – Manzano came out of nowhere to win his first NCAA outdoor crown in 2005 as a freshmen. In 2008, he became the first University of Texas athlete to make the U.S Olympic team in the 1500 meters. In 2012, he pulled off an even bigger surprise by coming from 6th place at the top of the homestretch to finish 2nd in the 2012 Olympic 1500 meter final, becoming only the 2nd American to win a silver medal at the distance since Jim Ryun in 1968 at the Mexico City Games. This surprise finish ended a 44-year drought for U.S. male middle distance running. Manzano has shown throughout his career he knows how to pull of the unexpected.

Reason #5 He’s the “King of the Jungle” – If his nick name is any indication, Manzano was meant to be a king. With the nick name “the lion” Manzano is meant to do one thing when he races and that’s find his way to victory lane wear the victors crown awaits him.

In a career with countless highlights, Manzano’s continued improvement, year after year, indicates that he still has a plenty of surprises left up his leave. Will one of those surprises be a victory over current two-time winner, Dejen Gebremeskel this Sunday? In my eyes, it’s a very strong possibility.

Rowbury Aiming to Pick Up Where Kastor Left Off 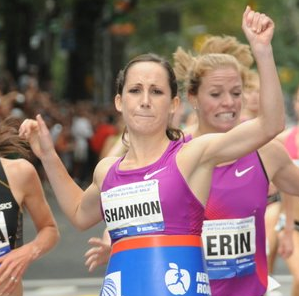 Shannon Rowbury is a world beater at both the 1500 meters and the mile. This weekend she’s going to take on the world’s fastest 5k runners by competing in her second Carlsbad 5000. She’s the U.S’s top contender for the win having finished as a runner-up in the event back in 2009.

Here are a five reasons why Rowbury will have a great shot at picking up where the last American woman to win, Deena Kastor, left off.

Reason #1 Experience – Rowbury has previously competed in the Carlsbad 5000 and was the runner-up. She achieved this finish in the 2009. Coming so close to winning this event will give her the confidence she’ll need to beat quite possibly the best women’s field ever assembled. Her previous experience will likely give her a much needed edge when the race heads into the closing stages and any runner left still in contention reaches within themselves for any mental edge they can utilize to pull away, hold off, or run down those close enough to vie for the win.

Reason #2 Successes on the Road – Even though Shannon hasn’t won a 5k on the road, she has had a great deal of success on the roads. She’s a two-time winner of the most prestigious road mile in the world, the Fifth Avenue Mile. I don’t think she’d mind adding a title from Carlsbad to her road running resume.

Reason #3 Strength-Oriented – Rowbury attributes her successes as a 1500 meter runner to her strength. Her attitude suggests that her abilities as a runner are well-suited for the 5000 meter distance. Recognizing this about herself encourages her to believe she can do well at this distance and possibly beyond.

Reason #4 Olympic Finalist – Rowbury has found a way to make two Olympic teams, qualifying in 2008 and 2012. And while at those games she has made history by becoming the highest finisher in the 1500 meters finishing 7th in the 2008 final and improving upon that performance by finishing 6th in 2012. She knows how to arise to the occasion on the world’s biggest stages. With the Carlsbad 5000 being the world’s fastest 5k, I think she’ll feel right at home racing for the win.

Reason #5 She’s Prepared – The great football coach, Vince Lombardi, said that, “The will to win is not nearly as important as the will to prepare.” Running and winning the Carlsbad 5000 isn’t just something Rowbury hopes to do, it’s a big part of her overall plan. Rowbury, a 1500 meter and 1-mile specialist her entire professional career, has run the 3000 meters and 5000 meters a few times during each season of her professional career. She’s made it known that that’s going to change over the next few years as she dreams about and prepares for the 2016 Rio Summer Olympics. Rowbury plans on moving up to the 5000 meters with the intention of “mastering” the event by 2016. And with that in mind she’s stated she’s “looking for the win” on Sunday.

No American woman has won the Carlsbad 5000 since Deena Kastor won it in 2002. From the looks of it, Shannon Rowbury plans on changing that in just a few days.