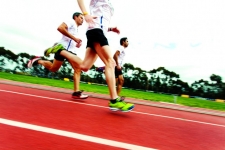 Leo Manzano has run 3:50.64 for the Mile, making him the ninth-fastest American ever at that distance. But the 28-year-old sealed his status in the history of U.S. running with a relentless finishing kick in the final of the 1500m event (the Mile’s metric equivalent) at last summer’s London Olympics. The Mexican-born American dashed to a second-place finish, becoming the first U.S. runner since 1968 to win an Olympic medal at that distance.

What makes the Mile so special?

Leo Manzano: “It’s the ultimate race, especially here in the U.S. If you ask anybody about it, most people have a pretty good idea what a Mile is all about. Everybody runs it in school. Everything here is measured in Miles. Most people don’t know what the 1500m race is, even though it’s almost the same thing. But when you hear someone say they run a 3-minute, 50-second Mile, they say, ‘Wow, that’s fast.’ Most runners here know how fast a Mile is because every time they run, either in training or a race, is broken down by Miles and pace-per-Mile.”