Still struggling to conquer the Mile 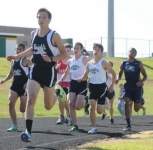 Inspired by U.S. Olympian Jim Ryun. A great Miler, striding so sleekly along, and I wanted to run the Mile, too.

By Bob Brody, The Record

Week after week I drilled with our team, and week after week I watched from the field as my colleagues went head-to-head against the local competition on the track. I was left out of the action, feeling every inch a failure.

I'm running around the oval running track near the water tower that looms over the football field at Fair Lawn High School on a Saturday afternoon in November 1969. I'm 17-years-old, competing in the Mile in my first track meet and running as hard as I know how.

We're barely a lap into the race, one-fourth the distance to be covered on the quarter-mile track, and already I'm lagging behind the six or seven other runners. I'm pumping my arms and legs with all the force I can muster, gasping, groaning, grunting, yet the farther we run, the farther behind I fall.

I'd joined my high school track team the year before, right after the Olympics in Mexico City, inspired by U.S. Olympian Jim Ryun. A great Miler, striding so sleekly along, and I wanted to run the Mile, too.

Maybe, I figured, if I ran fast enough, it would rescue me from the asthma I had suffered since adolescence. Maybe, too, I would be more popular with girls, grow hair on my chest and get into Harvard. Maybe my parents would stop being deaf.