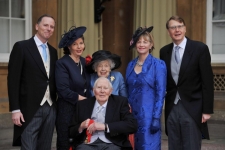 The Order recognizes people who have made a major contribution to the arts, science, medicine or government over a long period of time; just 53 other living people are Order members

As he was officially awarded one of the Commonwealth's most prestigious honors Sir Roger Bannister spoke of his pride at his achievements on the running track and in the field of medicine.

The first man to run a Mile in less than 4 minutes was invested into the Order of the Companions of Honor by the Duke of Cambridge at Buckingham Palace in London yesterday.

The 87-year-old's honor was announced in the New Year's Honors List at the end of December and follows a knighthood and a CBE.