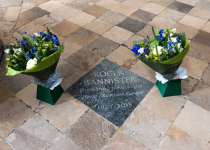 The diamond-shaped memorial, made of Blue Purbeck marble is close to the graves of Sir Isaac Newton, Charles Darwin and Professor Stephen Hawking.

A memorial stone to Sir Roger Bannister CH CBE was dedicated in Westminster Abbey on Tuesday, September 28, 2021. Sir Roger was the first man to run a Mile in under 4 minutes and later became a distinguished neurologist.

The Dean of Westminster, the Very Reverend Dr David Hoyle, led the dedication service, which was attended by family, friends and former colleagues. The new memorial is in the Abbey’s north nave, the area known as Scientists’ Corner, because Sir Roger always maintained that his achievements as a neurologist far outshone his time on the track.

Reflections on Sir Roger’s life were given by Professor Emeritus Dafydd Thomas, Consultant Neurologist and Chairman of The St Mary’s Development Trust; and Professor Emeritus Christopher Mathias, Professor of Neurovascular Medicine at the UCL Institute of Neurology in Queen Square.

The diamond-shaped memorial, made of Blue Purbeck marble and measuring 600mm x 600mm, was designed and carved by artist, John Maine RA. It is close to the graves of Sir Isaac Newton, Charles Darwin and Professor Stephen Hawking - whose ashes were buried there in 2018.

Sir Roger specialized in understanding and treating disorders of the autonomic nervous system, which controls all the automatic functions of the body, such as heartbeat, blood pressure and digestion.

In 1952, aged 23, he came fourth in the 1500 meter final of the Olympic Games in Helsinki. On May 6, 1954 at Oxford, Bannister ran the Mile in 3 minutes, 59.4 seconds, breaking the previous world record, which had stood for almost nine years, and a general perception that it was beyond human capacity to run a Mile faster than 4 minutes. That year before retiring from competitive athletics he also won the Mile at the Commonwealth Games and the 1500m gold medal at the European Championships.

Speaking before the service, the Dean said:
'Throughout his life Sir Roger Bannister reached out for that which lay beyond. As a sportsman, pushing himself towards a prize some considered beyond human reach, as a scientist ever eager for deeper understanding of neurology. We are delighted that his memory and his achievement will be set in stone in the Abbey. He ran the race set before us all.'

The Reverend Charlotte Bannister-Parker said:
'Today is an extraordinary honor for my mother, Lady Bannister, and all the family. To have my father’s work, as a doctor and medical researcher recognized in the Abbey means so much to us all. While his athletics career lasted 8 years, his medical one lasted over 60 and was equally ground-breaking. He was passionate and most proud of his work as a neurologist and work on the autonomic nervous system. So, an enormous thank you to all who made this memorial possible. We are deeply grateful that my father’s lifetime achievements will be remembered in this magnificent, sacred space forever.'