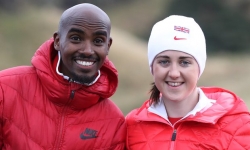 “The mix of fast- and slow-twitch fibers that she has gives her the ability to sprint and also run a marathon. I’ve never seen someone with that sort of capability.”

Even after defeat they chanted Mo Farah’s name like a mantra, the cries of “Mo! Mo!” growing more urgent as the chances of a selfie with him faded. The reaction is similar whenever he runs in Britain. For all the negative headlines around the United States Anti-Doping Agency (USADA) investigation into his coach, Alberto Salazar, and the questioning of his relationship with Jama Aden, the Somali coach who is under investigation by Spanish police, Farah remains this island’s most popular athlete by a Mile.

However, at the Great Edinburgh International XCountry on Saturday there were the first signs of a changing of the guard; a primitive sketch of the post-Mo era. It could be heard in the enormous reaction for the young Scottish athlete Laura Muir, who on Wednesday had shattered Liz McColgan’s UK indoor 5000m record by 14 seconds and showed no ill-effects as she anchored Britain to victory in a 4 x 1K team race.