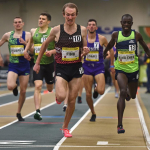 WINSTON-SALEM, N.C. – At the 10th Camel City Elite meet, Winston-Salem and JDL Fast Track will host some of the top distance athletes in the world on Saturday, February 5 at 2:00pm EST. This year’s roster includes seven Olympians who competed in either the Rio or Tokyo Olympics.

Additionally, the other pros include Maddie Kopp (pacer), Charlene Lipsey and Hannah Segrave in the women’s 800. Sammy George (pacer), Elly Henes and Dani Shanahan will be competing in the women’s 3000 and Mile. Emily Richards is also in the women’s Mile.

Murphy and Wilson both set flat track “world records” at the 2019 event, with Murphy running 1:45.92 and Wilson 1:59.26 for the 800 for their respective genders. The 2022 races will also feature the defending champion in 5 of the 6 events. Segrave will defend her women’s 800 title, Schneider will defend both the women’s 3000 and Mile titles, Nowak will defend the men’s 3000 title, and Fink eyes a Camel City Elite Mile three-peat!

According to facility director and elite athlete coordinator Craig Longhurst, this is one of the strongest international fields at Camel City Elite. Jesus Tonatiu Lopez, the Mexican 800m record holder, was an Olympic semi-finalist in Tokyo. “We have had many international athletes at Camel City before, but I can’t remember a year where we had Olympians from three other countries represented. It’s wonderful to give this type of exposure to international athletes to the fans in the area.”

According Longhurst, these are some of the top collegiate fields at Camel City. “We are always excited about the professional athletes that we can bring in, but this year’s college fields are the deepest we have had. The collegians seem to get faster each year, and this year is no exception. The pros are really going to have to be on their toes.” The collegians include multiple sub-4:00 Milers and the national champion NC State Wolfpack women’s cross country team members.

Admission for the event is $10 for adults, $5 for students and kids 12 & under are FREE. Winston-Salem is currently under an indoor mask mandate, so all spectators must wear a mask unless actively eating or drinking.

Camel City Elite will be streamed live online at jdlfasttrack.com as part of the RunnerSpace +Plus subscription package which starts at $12 a month.