Sara Vaughn Was the Feel-Good Story of the Summer, But a Sponsorship Deal Eludes Her 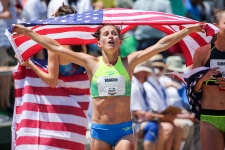 “It’s not just what you’ve done, it’s what you’re going to do. They have to really believe that the future is bright for an athlete like Sara to make that investment.”

Vaughn’s performance was notable, because while most of her competitors are full-time athletes, Vaughn, 31, works at least 20–40 hours per week, sometimes far more, as a realtor in Boulder, Colorado. She’s also a mother of three.

Her breakthrough, a triumph for people everywhere trying to fit their running into busy lives, resulted in an outpouring of support from the running community. In London, Vaughn had another strong showing, running a 1500m personal record of 4:04.56 and advancing to the semifinals of the event.

Virtually every other runner who made Team USA for worlds this summer had a contract with a shoe company. Vaughn, however, bought her own spikes for London. Three months later, she remains unsponsored.