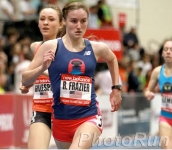 On the heels of Boston’s selection by the USOC to bid for the 2024 Olympics, the New Balance Indoor Grand Prix will kick off an indoor season in which the city will be the epicenter of track & field in the United States, with the Reggie Lewis Track & Athletic Center at Roxbury Community College also set to host the USATF Indoor Track & Field Championships, from Feb. 27-March 1. Tickets for both events—including money-saving packages for the two meets—are now on sale at www.nbindoorgrandprix.com  or by calling 1-877-849-8722.

Frazier (Ravenscroft / Raleigh, NC) returns to the New Balance Indoor Grand Prix for the third consecutive year. This time, she comes to Boston ranked #1 in the U.S. in the both the Mile (4:41.56) and 1600 meters and as the runner-up at the 2014 Foot Locker Cross Country Championships. She is the sister of Wesley Frazier, who won the Girls’ Junior Invitational Mile in 2013. Sheva (Pennridge / Sellersville, PA) finished fourth in the state AAA cross country championships last fall, and 25th at Foot Locker.

Among the athletes who have competed in the Girls’ Junior Invitational Mile since the meet began 20 years ago are several athletes who have since turned professional, including Emily Lipari, who now runs for the Boston Athletic Association; Cory McGee, a member of New Balance Boston; Ashley Higginson, a two-time USA Outdoor Championships runner-up in the 3000m steeplechase and Jenny Simpson, the 2011 World Champion at 1500 meters / Mile ranked #1 in the world by Track & Field News magazine for 2014. Simpson will be competing at the meet this year in the 2 Mile, and Lipari will run the 1000 meters.

The New Balance Indoor Grand Prix, which has played host to seven World Records and 11 U.S. Records, will be the second stop in the 2015 Indoor USATF Championship Series, and will begin on Saturday, Feb. 7 at 4:30pm.