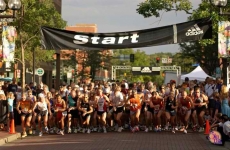 There is something approachable and achievable in the Mile. The race is hard, but it's over quickly. It's achievable for both adults and kids alike.

Roger Bannister of England was the first to break the 4 minute Mile barrier in 1954. Fifty years ago last week, 1960's teen phenom Jim Ryun of Wichita, KS, was the first high school boy to break the mythical barrier. The Mile has become the measure of running accomplishments in America, but there were very few Mile races across the country until recently.

I didn’t run track seriously as a kid growing up. I had to run the Mile in middle school testing for the Presidents Fitness Award. In college after taking to jogging I ran a 2 mile time trial in a low key running class. But I had never raced a Mile race until I moved to Boulder and discovered the fun and excitement of the Pearl Street Mile (photo, above right).

There is some debate on if we should even care about the Mile as an event, and why not just convert to metric all together. Ryan Lamppa has this to counter, “The Mile is ‘America’s distance’. This country understands miles and miles per hour,” After all, even in timing for a 10K event, results may display your average pace per Mile.

Ryan Lamppa is the media director at Running USA and the founder of the Bring Back the Mile effort. Lamppa hopes its rebirth can get more people running the distance, promote track & field and keep the heroics of athletes like Ryun alive in American culture. “Most everyone can get out and run a Mile, if they can do that a few times a week, they are on their way to a healthier lifestyle.”