Push to Bring Back the Mile to Track Competition 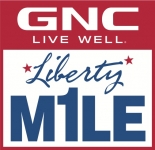 PITTSBURGH, Pa . - The Pittsburgh Three Rivers Marathon is partnering with a health and nutrition company to host the first GNC Liberty Mile run. It is expected to be the third largest competitive one-Mile road race in the United States.

The event will take place on August 17 and will begin at 7:00pm on Liberty Ave. Runners will line up on 17th Street in the Strip District and cross the finish line on 6th Street downtown. The male and female runners who come in first will each take home $4000.

Jennifer May, spokeswoman for the Pittsburgh Marathon, said the event is part of a national campaign to bring the “one-Mile” into the spotlight once again. “The goal of that campaign is to bring back the prominence in American sports that this race has had, you know, a very rich history. It’s an Olympic year, so it’s a great year to celebrate the distance itself,” said May.

More than 20 cities are holding similar one-Mile events, including New York,  St. Paul, Nashville, Madison and Palo Alto. The closest Olympic contest in distance to the Mile is the 1500 meter event, about .93 of a Mile.